One thing I like to do when playtesting a game with variable starting positions is a focused test on the worst-case setup. If an extremely slanted start of the game is still interesting and fun, that’s a good sign. If not, there’s a problem to be addressed.

Over the Next Dune has a variable setup, and I’ve found that the initial arrangement of the searchers heavily impacts the difficulty. If the searchers are coming quickly for the players, they need to work hard just to survive to the next turn; when the searchers start farther away the players have more time to get into ideal positions. Either one can be interesting; so far, so good.

However, since I was always testing a random setup I had only ever had one or, at most, two searchers driving toward the players at the beginning of the game. What if all of them started as close to the players as possible, and immediately moved closer?

I rigged up the following starting positions:

Assuming the worst possible search phase for the players on turn one, wherein each searcher moves directly toward the players, the game ends up here: 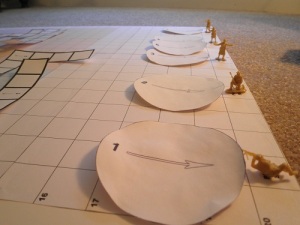 Every player has a searcher directly in front of him or her. The only safe moves are sideways.

Even at this point, there are actions the players can take. For example, the player on the far left (at the bottom of the pictures) can move sideways and trick the searcher in front of the next player over into following him or her back to the corner. That frees up the next player to save them both: 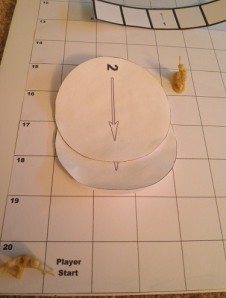 However, after messing around with it for a little while I don’t think all of the other players can get free. There’s just too much real estate to cover. For the last player in line to save the other two he or she would have to move a minimum of six spaces just to get to searcher #3 (from column 18 to column 12) in front of the middle player, which is impossible. The middle player is in the same boat trying to save the player on the end. The player in between them could free either one, but can’t move far enough to save both. If the player in between saves one then that player can return the favor, but someone is still out in the cold.

If there’s a solution I’ve missed, please let me know. Assuming there’s not, however, the game has a weakness: there is a possible setup in which the players automatically lose. That’s antithetical to the rule for OtND that players should make interesting decisions. In this setup, the players’ decisions are meaningless!

The facts: Under the setup rules as they stand, it is possible for every player to have one or more searchers directly in front of, and immediately adjacent to, him or her after turn one’s search phase. When this occurs it is impossible for all of the players to move to safety during the sneak phase; at least one player will certainly be caught. As a result, when this combination of setup and searcher movement obtains the players are guaranteed to lose regardless of what they do.

1. How can the game be altered so that the players cannot be in a situation where all of them have searchers immediately and directly in front of them after turn one’s search phase?
2. Should any alteration be made to address issue #1?

Raising the second issue might seem heretical for a game designer–if there’s a problem, why shouldn’t something be done about it? However, I feel that it’s worth taking into account that this is a focused test to see what happens in a very unlikely situation. The vast majority of players will never encounter this unwinnable scenario; I’ve played OtND many times and it never happened until I intentionally caused it. If fixing the issue turns out to cause more problems than it solves, it may be that the best course is just to let the matter lie.

The rule (for issue #1): Decisions players make during a game of Over the Next Dune must be interesting.

Thinking it through: There are two routes one could go down in giving the players decision-making power in this situation: either the players can be given a new tool that makes the unwinnable setup manageable, or the setup rules can be altered so that the configuration which takes away their decisions can’t occur.

Right from the start I’m not keen on creating a new player power. It adds complexity to the most basic aspect of the game–avoiding and manipulating the searchers–which will make it harder for new players to learn the rules. Furthermore, making the fundamentals of the game more complex will make it harder to add nifty “chrome” elements later. Each additional moving part the chrome has to interact with will add to the difficulty of fitting in the new element, and the more challenging the basic game is to learn the less chrome will be desirable. I think, at least preliminarily, that it will be possible to add to the game in a way that makes for more, and more interesting, decisions; if possible, I want to preserve space for those additions.

I’m also reluctant to give the players a new tool because it could easily have unintended consequences. An option for players that’s perfectly fair when it’s being used to fix the unwinnable setup on turn one might turn out to be be so strong on turn eight as to make victory trivial. Playtesting could find those consequences, of course, but it’s important to prioritize. Testing a player power designed to mitigate a problem that will arise in an infinitesimal fraction of games takes time away from other ideas that will be of greater benefit.

So, what about changing the initial setup? It seems like the ability of the players to make interesting decisions can be preserved simply by moving the searchers back a little bit at the start of the game: In addition to re-rolling 1s on the twelve-sided die that’s used to place the searchers, 12s could also be re-rolled. Under that rule the searchers could get no further than row 18 during the first search phase, which means that they would never be adjacent to and “locking down” a player on his or her starting square. No matter where the searchers start or what they do, each player will always have the chance at a helpful move during turn one and a loss will never be guaranteed.

The weakness of that solution is that while it gives players a little bit of room to breathe, it still leaves them at the mercy of the searcher movement cards. Imagine doing the same test as above, but the searchers start at row 11 instead of row 12 before moving straight at the players. Under this new setup the players would be able to escape into the channels between the searchers. However, those spaces are only safe if the searchers keep going straight or move away. If the players happen to draw a card that angles a searcher closer, that’s it–one or more players get caught. There might be some optimization to do in terms of minimizing the number of auto-lose draws, but that’s only an interesting decision once or twice. (Of course, this whole scenario is so unlikely that it shouldn’t happen to a player more than once or twice over the course of many, many games.)

Other options include setting a flat limit on how close the searchers can get to the players on turn one and altering the searcher-facing rules so that searchers close to the players can’t start out rushing toward them. The former feels arbitrary and intellectually unsatisfying; setting a cap that has nothing to do with the other movement rules is a pretty obvious bodge. The latter, for its part, poses a risk of clustering the searchers at the “top” of the map so as to make the early game boring and the endgame impossibly difficult. I’m not thrilled with either of those options, though they’re on the table for further consideration.

As of now I’m going to put some energy into testing the “re-roll 12s” change. I’ll be looking for those unintended consequences, as well as checking to make sure it actually fixes the problem it was intended to address. More on this next time.

Posted on February 17, 2014 Posted in The case studyTagged case study