Sometimes you need to test the simple thing that will probably work, even though no one will be impressed that you thought of it. As a designer I always feel good when I come up with a unique solution to a problem. Recent playtests of Lines of Questioning have reminded me, however, that basic fixes are considered basic for a reason: they consistently do the job. Flashy solutions that bring excitement to the table are much more likely to come apart under the pressure of play. It’s therefore wiser to check the simple possibilities first, deploying unique and tricky mechanics only when their necessity outweighs the risks involved.

Last time we talked about Lines of Questioning I was looking forward to testing a new player power. 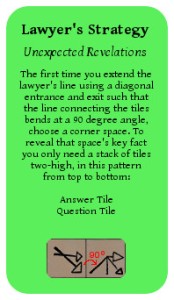 One of my expectations for this power was that it would make the game substantially easier. Lines of Questioning was fun, but incredibly difficult. Providing an easier victory condition in return for engaging with a lesson seemed like a reasonable fix.

To my surprise, however, this power fell flat on its face. One of the things I track in playtests is how close a losing player came to winning. Based on that data, I estimated that the power would turn approximately 20% of near-losses into victories. In practice it had virtually no effect on the win rate.

Even now I’m not sure why the power didn’t work. Variance is a possibility, either in the pre-power data (lucky players got close to victory more often than the game’s difficulty made sustainable) or in the power testing (unlucky players had tougher games than normal, canceling out the effect of the power). Whatever the cause, the result was clear: for all its theoretical advantages the power wasn’t working.

That left me with only one idea for how to handle the excessive difficulty issue. It wasn’t neat. It wasn’t interesting. It did, however, have the merit of being simple.

Facts:  Testing has demonstrated that some tiles are better than others. In particular, tiles with multiple entrances and exits are very strong. Such tiles offer the player lots of options, can be used in unusual ways to get out of trouble, and enable efficient movement around the board.

90-degree turn tiles, on the other hand, are quite weak. This is both because of their limited usefulness and because there are a lot of them. Hands entirely made up of 90-degree turns are common, and are quite challenging to play through successfully.

For that and other reasons, Lines of Questioning is very difficult. While opinions may differ on how challenging a solo game should be, a win rate near 0% is clearly unacceptable by any standard.

Issue: How should Lines of Questioning be made easier?

1. Try the simple thing that will probably work.

2. Having more of the stronger tiles, and fewer of the weaker tiles, makes the game easier.

Do the same for the witness tiles as well.

Thinking it through: I’ve been trying to do all sorts of complicated things to make Lines of Questioning easier—but what about the simple solution? If 90 degree turn tiles are bad, especially when there’s a lot of them, why not have fewer of them and more of the good ones?

As it’s turning out, this change works like a charm. The win rate is substantially higher, and frustrating all-90 degree-turn hands are rare. Having more diagonal entrances and exits also allows for some interesting strategic maneuvering, like doubling the lines back on themselves.

In fact, this is going so well that it’s providing a great foundation for the “basic” variant I’ve been wanting to lock in. Up to this point I’ve been looking at new rules to make the basic game easier, which of course runs contrary to the goal of a simple, quick-to-learn version. Lowering the difficulty without needing more rules makes that variant realistic.

Sometimes a game needs an additional, complex rule. Sometimes, though, what it needs is a willingness to try the obvious solution to a problem. Exchanging bad tiles for good ones isn’t a remarkable design achievement, but if it makes Lines of Questioning better, then so be it. I’ll trust the extra impressiveness from the game being good to take up the slack.

One thought on “Lines of Questioning & Theory: Test the Boring Option”